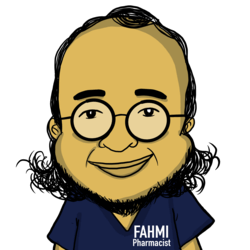 Fahmi Hassan has been working as a pharmacist attached to the Ministry of Health Malaysia since 2007. He obtained his Bachelor Degree in Pharmacy from IIUM in 2007 and then Masters of Science (Pharmacy) from UiTM in 2015. Currently, he is pursuing his PhD in the field of Social Pharmacy in UKM. His last position before furthering his study was Ketua Penolong Pengarah Kanan at Program Perkhidmatan Farmasi, KKM.

He is also an author of several best-selling titles mainly from the Cakar Ayam Seorang Doktor series. He manages his website (www.fahmihassan.net) and also actively tweeting about health-related topics on Twitter (@fahmibinhassan).

He believes that public education on social media is one of the most important strategies to address misinformation and improve health literacy. Concerns and misinformations should be addressed professionally and strategically to increase public trust and confidence in health issues.